We are moving across the hall in our home in Fresno. We will have a room solely dedicated to the model railroad with a double closet workshop/shelving/storage. Our move should be complete and more work on the layout will continue this holiday weekend.
Posted by Chuck Geiger at 1:34 PM No comments:

We went to visit the San Diego Model Railroad Museum today. It was a very mixed experience. Beforehand I took a look at their Web site, and learned that they have over 2700 sqm of floor space making it one of the biggest model railroad museums in the world. Now that's cool.

Once we got there two things irritated me right away:
Now, the latter item wasn't really that bad, but it made two other items stand out even more:
As I was wandering down the visitor aisle between the first two layout rooms, I was beating myself that I didn't visit during one of the twice-weekly "work sessions" (Tuesday and Friday evenings). Doing that would have accomplished two things:
I realized that this museum is really a collection of a few large club layouts in one space.

The O-Scale "Cabrillo Southwestern" didn't really excite me that much. The layout lighting was terrible, and it was hard to see details in the back of the rectangular layout room, since the visitor aisle runs only along one of the long edges of the rectangle. Looking at construction methods and track layout it appears this layout has been around for quite a while (though the Website claims it was designed in 1986 ... Well that's still 25 years :-) The layout did remind me about how big O-Scale really is. Thus, the hefty rolling stock had some serious "oompf" to it. 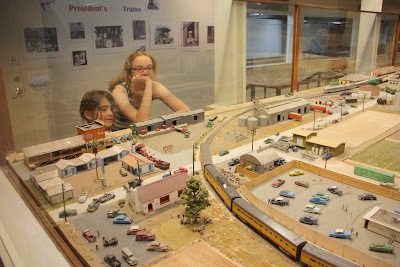 A large part of the HO-Scale "San Diego & Arizona Eastern", especially near the museum entrance, is still visibly under construction. This layout attempts a quite correct depiction of actual rail lines around San Diego to the East and South into Mexico. This is one of the biggest layouts in the museum space-wise, and was quite interesting to view. The area depicting San Diego looks very interesting to operate on. The "desert side" with El Cajon has some impressive deep canyons and trestles , though the scenery is very sparse. This layout "burns" a lot of space on the mountains, canyons, and the descent into El Cajon. It does look more or less accurate and true to the prototype. Unfortunately for the museum visitor, the prototype is a lot of single-track main line. The layout is manually controlled, and doesn't appear to have any automation, so while we were visiting two friendly guys were running trains over the mountains. ... For some reason pretty much all major trains on the layout were at or en-route to El Cajon. So there was a major traffic jam getting trains out from El Cajon and back on the San Diego side of the layout. Somewhat interesting for the operators. Terrible for the visitor. This layout has a lot of potential, though... 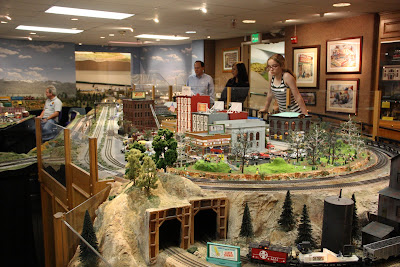 The N-Scale "Pacific Desert Lines" was cute to look at. The visitor aisle side of the layout is painted like a passenger railcar and the viewing windows are the windows of the car. Neat. The layout is large and very deep (6+ meters). Given it's N-scale, it's hard to see anything interesting that's more than 2-3 meters away from the visitor aisle. I saw a single train moving on this layout. Disappointing.

The kids had a blast in the "Toy Train gallery" which is a relatively small room with 3 gentlemen running Lionel trains on 3-rail track. The layout is stuffed with tracks all over and there's a lot going on, so a very welcome diversion from the mostly static displays we saw with the other layouts. 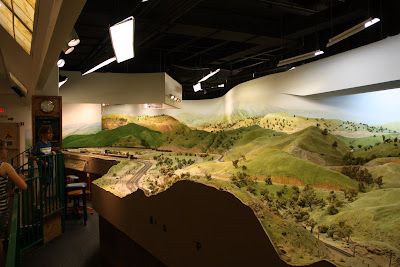 Hands-down the most impressive layout at the museum is the "Tehachapi Pass" HO layout. The scenery in combination with the painted backdrop is superb, and the layout is actually arranged to be viewer friendly. There are no windows to peek through, no back at the wall features like on most of the other layouts. Just the SP/BNSF Tehachapi mainline climbing through the mountains up to the pass. Operationally, again this is not particularly interesting to watch, and not many trains where running, but the presentation and level of detail make up for it. I particularly liked the scene at Bealville, which has a very nice, old-timey atmosphere. Even though this layout is controlled digitally, trains are run over the line by an operator, one at a time, so there wasn't a lot going on here either.

Was it worth going? I don't know. Definitely more interesting than some other attractions at Balboa park, but my expectations were certainly higher than the delivery. I came for the layouts, so I didn't pay much attention to the wall display cases, with exception of the one that had items from John Allen's Gorre & Daphetid layout, including paper machee models of the layout.

Due to the impossible photography conditions, I didn't take many pictures. However, I got some video footage and will upload to Youtube if it's usable.
Posted by Chuck Geiger at 4:51 PM No comments:

Posted by Chuck Geiger at 4:49 PM No comments:

A jog down Memory Lane


Posted by Chuck Geiger at 3:53 PM No comments:

THE SAN DIEGO AND ARIZONA EASTERN

The San Diego and Arizona Railroad opened the first modern line between San Diego and the East. The railroad was one of the most expensive ever built in the U.S., costing almost $19 million in 1919. In the Carrizo Gorge, the railroad crosses 14 trestles and goes through 21 tunnels in only 11 miles. From San Diego to El Centro, the railroad rises and falls over 3,700 feet. If ever there was a monument to a builder, the San Diego and Arizona Railroad speaks of the energy, skill and determination of John D. Spreckles and his men, the last of the great railroad builders.